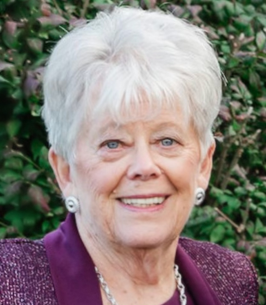 Faith Elizabeth (McLaughlin) Doiron of Hudson, Massachusetts, age 83, passed away at home on Sunday, August 28, 2022 after a brief illness, surrounded by her loving family.

She was the daughter of the late Herman G. McLaughlin and Alice (Dorsey) McLaughlin, both of Limestone, Maine. She graduated from Limestone High School, and from Mercy Hospital School of Nursing, in Portland, Maine. Faith married Robert J. Doiron in 1961 and moved to Cleveland, Ohio, where their three daughters were born. They relocated to West Chester, Pennsylvania, where their son was born.

They then moved to Sudbury, Massachusetts in 1974. Faith returned to her nursing career after raising her children and worked at Acton Medical Associates for 16 years, retiring in 2007.

She enjoyed many years at “the Duck House” with her grandchildren and family. Faith traveled often with her sister, Mary Louise, going “up home” to Maine. She loved spending time with friends playing mahjong, bridge, going to lunches, and other adventures, and the “Villagers.”

In lieu of flowers, donations may be made in Faith’s memory to: UMASS Memorial - Bobby’s Bullpen, which can be mailed to: Office of Philanthropy, UMASS Memorial Health Care, 365 Plantation Street, Biotech One, Worcester, MA 01605 (https://support.umassmemorial.org).

Relatives and friends are invited to visit with the Doiron family from 5 – 8 PM on Thursday, September 1, 2022 at the BRITTON-SHREWSBURY FUNERAL HOME, 648 Main St., Shrewsbury. Her funeral Mass will be celebrated at 10 AM on Friday, September 2, 2022 at St. Mary of the Hills Church, 630 Cross St., Boylston, with burial to follow at Mt. Wadsworth Cemetery in Sudbury