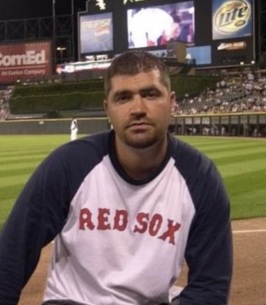 Jared Michael Miller, 46, formerly of Shrewsbury and Whately, MA passed away peacefully in his sleep on Tuesday, August 23rd in Palatine, Illinois, a suburb of Chicago.

He was the beloved son of Deborah A. (Searl) Donohue, of Shrewsbury and Joseph S. Miller and his wife, Carolyn Miller, of Whately, MA. He leaves his daughter Karla D. Miller, of Evergreen Park, Illinois, and daughter, Alivia Udal, formerly of Gill, MA; his sister, Kristie L. D'Elia, of Worcester, his step-brother, Geoffrey P. Donohue, of Sterling, MA, as well as many cousins, friends and acquaintances.

Jared was born in East Stroudsburg, Pennsylvania where he spent his early childhood years. When the family moved to Massachusetts in 1979, he attended the Shrewsbury Public Schools. In 1992, he moved to Whately, MA where he attended Frontier Regional School in South Deerfield, MA. In 2006, Jared moved to the Chicago area where he worked in the restaurant business and later attended Everest College, graduating in 2009.

Jared was fun-loving with a wonderful sense of humor that would brighten anyone's day! He was kind hearted and had an instant rapport with the elderly and children alike. He was passionate about cooking and enjoyed sampling foods from many cultures. He was an avid reader and had an artistic flair. These he shared with his daughter at every opportunity. He loved sports, especially the Boston Red Sox and New England Patriots for which he bore the brunt of much teasing from his Chicago friends.

Relatives and friends are invited to visit with Jared's family on Thursday, September 22, 2022 from 4-7 PM at the BRITTON-SHREWSBURY FUNERAL HOME, 648 Main St, Shrewsbury. A funeral Mass celebrating his life will be on Friday, September 23, 2022 at 10 AM at Saint Mary's Church, 640 Main St., Shrewsbury. Burial will follow in Mountain View Cemetery, Shrewsbury. In lieu of flowers, memorial donations may be made to Alcoholics Anonymous: https://contribution.aa.org or to Stairway to Freedom - Venmo: @Recovery-House-1